A) Is he a steampunk magician?
B) Is he the neighborhood accordion repairman genius?
C) Is he a punk rock roboticist?
D) Is he a bovine pyrotechnician?
E) Is he a TV star?
F) Is he the personification of an East Bay Maker?

Why, you guessed it!  Kimric Smythe is G:   ALL OF THE ABOVE! We’ve done our best below to provide some backup to these assertions, but if you want t0 see for yourself what it feels like to be around a Renaissance Maker Man, you’ll have to come visit Kimric Smythe’s prime space at the East Bay Mini Maker Faire.  Now for the evidence:

A) Is he a steampunk magician? Kimric helped build and plumb and fancify the Neverwas Haul, the fantastic and fabulous Victorian house-on-wheels.  This is Kimric’s steampunk era, Kimric stepping out into the world of early-industry fantasy and innocence, a celebration of “an era when technology and exploration fueled the imagination of the Continent, and gentlemen and ladies of leisure set out in pursuit of the strange and wonderous.”

Kimric actually excels in steam power applications, has made steam-driven calliopes to buggies to whistles,  and will be bringing a range of steam powered devices and whirlygigs to the EBMMF.

B) Is he the neighborhood accordion repair genius? Why indeed, Kimric is the fair proprietor of Smythe’s Accordion Center in downtown Oakland.  Kimric and some friends have also designed and built the best accordian amplifier on the market (a dubious distinction in some people’s minds, but certainly a feat of maker prowess).  If you visit the Accordion Center, you’ll find Kimric has an incredible array of gorgeous accordions for sale.  And for sure if you have an accordion that needs love and tender repair, someone has already probably told you to take it to Kimric.

C) Is he a punk rock roboticist? Certainly.  Or something like that.  Kimric has been a team member of the legendary machine performance troupe,  Survival Research Laboratories (SRL), for over 20 years.

SRL was born way back in the late 1970’s by Mark Pauline along with Matt Heckert and Eric Werner. Along the way an astounding array of Bay Area artists have made their way through the SRL clutches, learning tricks and skills, and putting on often outrageous displays of remote control debauchery.  Kimric persists, and always brings solid quirk to SRL shows.  He’s good at dynamic and funny props that taunt the machines, as well as for providing irritation like an excruciatingly loud jet engine on a forklift—or the Kimric Kill Kart with its 6-barrel shockwave cannon. 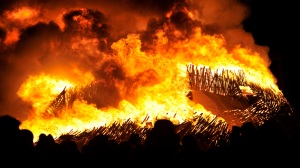 D) Is he a bovine pyrotechnician?
Most early “Burners” remember Kimric.  He led the pyro design and detonation of the Man at Burningman throughout the 1990s.  But even just this past Burn, Kimric worked with Temple of Flux to design the pyro for their 2010 Burningman temple. (Image courtesy Extramatic.)  Kimric is also fondly remembered for the legend of the Java Cow, a early morning playa apparition offering unadulterated caffeine. 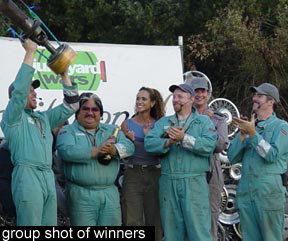 E) Is he a TV star? Why yes, of course. Back in the 2000’s, Kimric led a winning Junkyard Wars team, meeting the challenge of building a machine using a car and a soccer ball to play golf.  (!?)  Kimric’s idea was to build an industrial version of a tennis ball pitching machine, and with his dad by his side, Kimric not only wooed the audience of millions, but his team won the challenge.

F) Is he the personification of a Maker? Yes.  He can’t stop and you can’t stop him.  It’s in his blood and his genes and his clothes.  If you’re still on the fence about his qualifications, come see for yourself at the East Bay Mini Maker Faire.

10 responses to “Who is Kimric Smythe?”