The Heavy Pedal Cyclecide Bike Rodeo began in 1996, when members used bikes not just for transportation but for art, music, and performance. Discarded bikes rescued from the dumpster became extra-tall bikes, double-decker bikes, chopper bikes, and pedal-powered machines, including the “Suburban Intruder” Lawn Mower Bike, a Rocket Bike, and the Chupacabra. What began as a club grew into what SF Weekly called in 2003 “an in-demand troupe of welders, musicians, clowns, and general nutcases roughly two dozen strong.”
They made use of their widely varied skills. Club members created Rodeo-style comedic skits and stunts, featuring their metal steeds and riders as clowns, rustlers, and beauty queens. They rope audience members into the show, encouraging them to compete in contests of bike-riding skill, such as barrel racing, piñata-bashing and tall bike jousting, often accompanied by their own mariachi-country-punk band “Los Banos.” For the past ten years, the independently owned and operated Heavy Pedal Cyclecide Bike Rodeo has toured around the US and down into Mexico.

Flush with success from the rodeo show, they created the nation’s first and only pedal-powered carnival midway. First came the exciting Dizzy Toy, followed shortly by the Pedal-Powered Ferris Wheel, the nostalgic Bicycle Carousel, the charming Flight of the Bumblebee, the cacophonous Axe Grinder, and more. They’re still building, and they’re still devoted to the idea of the bicycle as a piece of interactive kinetic sculpture that can entertain, startle, and excite.
What they bring, perhaps, is a message of levity during politically and economically stressful times. What they will meet, most likely, will be blank stares.” San Francisco Chronicle April 2003

This year at the Faire, Cyclecide will have three of those midway rides plus a whole pen of hacked and mutant bikes for your riding pleasure.
See you Sunday, Cyclecide! 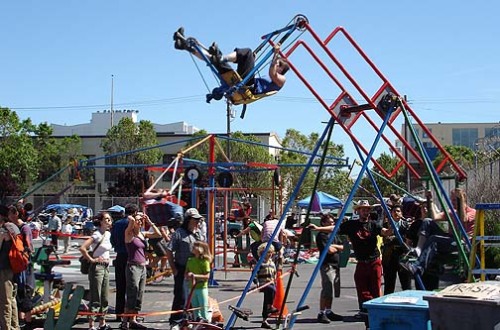 Paul’s Rides are pedal-powered carnival rides.  Two- and three-person ferris wheels; tiny and big carousels, two- and six-seater dizzy toys. These are rides that make you scream out loud and make you dizzy with good old centrifugal force.   You get off and can’t walk straight.  Paul’s Rides are human-powered hilarity. 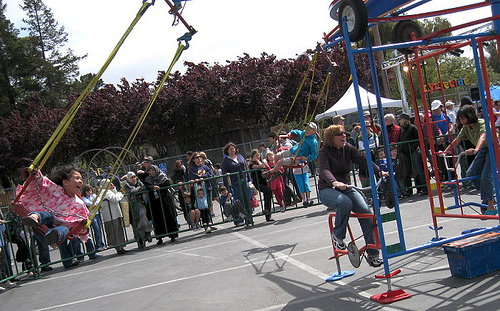 “Paul” is artist Paul Ceseskwi (AKA Paul the Plumber).  He started his exploration of these circus rides in 2000 with the Dizzy Toy and building up to his 2004 masterpiece, the Star Wheel.  The Star Wheel debuted at Burning Man (which sponsored its creation), went to the 2007 Austin Maker Faire, and has been a rare experience since because of its need for space to roll. You’ll have to see this beautiful short film here to see why:

Cyclecide, though, is the band of kooks and tinkerers and performers who helped build the rides with Paul and who have incorporated the rides into a kinetic circus involving jousting, clowns, mash-up cycles, rodeo rituals, inner tubes, and tu-tus.  The Heavy Pedal Cyclecide Bike Rodeo makes it all come together.

Inspired by discarded bikes, American rodeo culture, and punk rock, Cyclecide assembled itself way back in 1995.  First it was building funny bikes (the Lawn Mower bike, crazy choppers, tall bikes, and the fire-breathing Chupacabra). Along the way it morphed into a full-blown bike rodeo, complete with a house band (“Los Banos”) and stage show, and the fabulous ride midway. The show always includes musical interludes and comedic skits and stunts involving the whacked-out bikes and the Cyclecide staff rodeo clowns, stunt riders, and beauty queens. 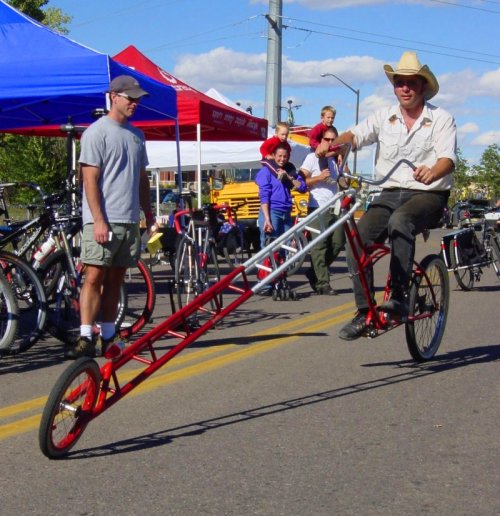 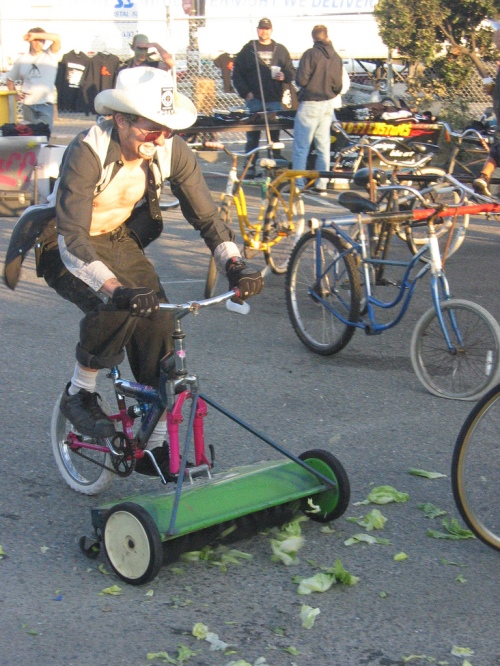 Chances to experience this quality of interactive fun just come every so often in life. Circle your calendar now for October 24 and get your g-force giggles out with the Heavy Pedal Cyclecide Bike Rodeo at the 2010 East Bay Mini Maker Faire!